A very generous funder of EducationSuperHighway sent us to Montgomery, Alabama, last week so we could experience the National Monument for Peace and Justice. This monument was conceived and created by the Equal Justice Initiative (EJI), an organization (founded by Bryan Stevenson) devoted to making America live up to its ideals. The memorial is a stark and overwhelming reminder of the nation’s failure to stomp out white supremacism and the persistent scourge of injustice towards people of color.

We also visited the Legacy Museum and spent an hour in the offices of EJI talking with a couple of the legal fellows who are working in the trenches of the effort to fight injustice, especially focused on ending inequitable application of the legal system and the death penalty. 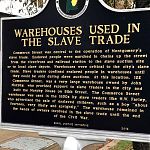 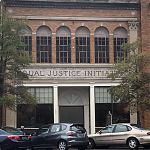 EJI’s offices are located on Commerce Street in Montgomery, housed in a building that was used by slave traders to warehouse the humans that were sold at auction in the center of town, at the artesian well where this beautiful fountain is located.

From the fountain, it’s a short walk to the Dexter Avenue Baptist Church where Martin Luther King, Jr. served during his early 20s and where he joined with the black community to carry out the Montgomery bus boycott. Just beyond the church is the Alabama state capitol building, the site of the inauguration of the president of the Confederacy and the seat of the Confederate government. Montgomery is a town rich with juxtaposition. Sprinkled with markers recalling its history of slavery, white supremacism, and rebellion against America, the city is also marked with signs memorializing the history of the civil rights movement.

The National Memorial of Peace and Justice was overwhelming. It’s design is stunningly beautiful but it memorializes the ugliest and most violent actions perpetrated against our black sisters and brothers. Each Corten steel monument in the memorial represents a county in America where lynchings took place, and each has the names of the lynched inscribed in the steel. Adjoining the memorial are duplicate steel monuments designated to be taken to each of the represented counties and installed in those places where lynchings occurred, creating a larger, distributed memorial designed to bring healing through truth and reconciliation. 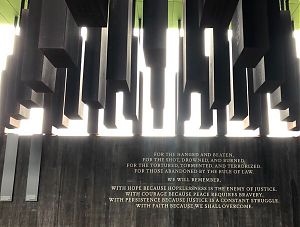 Now, as our country faces a revival of the ugliest aspects of our history, as our president and others stoke hatred, and offer encouragement to racists and white supremacists, we have an opportunity to respond with love, grace, and reconciliation. Having visited this memorial, I am hopeful that we will join with Equal Justice Initiative, with Bryan Stevenson, with Rosa Parks, with Martin Luther King, Jr., and with the thousands of others who work and worked tirelessly for civil rights and justice for all, and that we turn back hatred and injustice.

« Lapsed Lutheran :: I'm running for School Board in Oakland »